The Auburn show was cancelled which unfortunately lead to the Kennewick show being cancelled as well.

Joey is doing ok and hopes all the Maggots will understand the reason for canceling the shows. Joey will be recovering from his ailments. Please understand the band did NOT want to cancel and was very difficult for Corey to make the announcent. Slipknot will tell you that they are not Slipknot without all members of the band and with Joey as a key member no one can just come in and replace him for the show.

Slipknot asks that fans in Seattle and Kennewick please understand the reason for the cancellation and as always Slipknot will make up the shows to you.

Once again the bands apologies to you all. Keep your tickets as dates to re-schedule will be announced very soon!

Last night’s show in Auburn to kick off the 11 show run was cancelled within the last hour of the set as Frontman Corey Taylor announced. Drummer Joey Jordison was taken to the hospital. The issue was major but with medical attention he will recover and be ready for tonight’s show in Kennewick, WA. Corey says, “we’re really fucking sorry man.” He means that. So much energy was already built during the day. Shawn Clown celebrating his son’s birthday with his son in attendance at the show and just the madness of prepping for the first show. That’s energy enough there not including that from the crowd.

White River Amph. ticketholders keep your tickets as the band is rescheduling another date to make up for this. As always, “Slipknot will be back.” So please dont be angry or pissed off or calling them sellouts. A medical emergency is just that…..an emergency. Bear with guys and they will return sooner than you expect.

well its only 10:22pm here but Saturday the 22nd begins the tour run in Seattle WA and ending at Eagle’s Ballroom in Milwaukee WI. This will for the most part finish off this segment of touring for All Hope is Gone album and next year will begin a solo project for Corey Taylor which if you attended some of the festivals in Europe such as Sonisphere then you got a taste of Corey’s new material. After Corey does a tour on his own you can expect a new Stone Sour album as well. Many songs have already been written and worked.

If you dont know already, Stone Sour members James Root, Corey Taylor and Shawn Economaki all are on the Slipknot tour. Well of course James and Corey but Shawn is our Stage Manager so you can bet material has been worked already. You can expect to see Mr Mayorga again on drums and Josh Rand also has some material ready for the studio. Its just a matter of time at this point and as Slipknot winds down this tour you will see more of Corey and James.

In November this year Corey and fiancee Stephy are getting married. It wont be a huge wedding but family and friends will be there. I know I will. So keep your ears focused over the next year!!!

Across the country fans are packing into GameCrazy stores to play the Madden 2010 Tournament for a chance to win a free copy of the game and half off for the second place winner. My cousin when i left was in the second round and things were getting narrowed down. The game goes for sale at 12:01 am tonight August 14 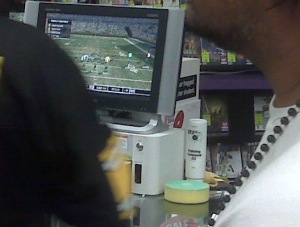 Deadline for My Goal